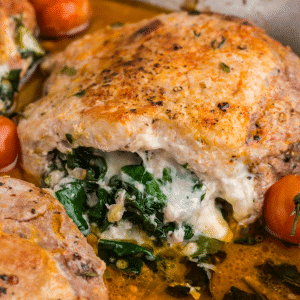 5 from 1 vote
Created by: girlinspired

Add sundried tomatoes or red bell pepper to the spinach/cheese. Do not overcook the pork. Brown it on each side and then finish it in the oven for tender pork chops. Internal temperature of the pork should register 145°F.  Allow Pork chops can rest a few minutes after cooking. Meat should be mostly white; a slight pink tint is fine and safe to eat. STORAGE: Store in an airtight container in the refrigerator up to 3 days. Store in the freezer for up to 1 month.