Need a quick idea to keep your kids entertained AND learning? I created some free printable activity worksheets that allow your kids to PLAY with their food and LEARN at the same time. It’s a win-win! All you need are a handful of colorful goldfish – a mom’s purse staple – and a few crayons and let your kids do the rest. These free printable worksheets include several math concepts as well as coloring and sorting – perfect for young elementary learners.

How much does your family love Goldfish® crackers?  They have been a staple in my house from the time my kids were old enough to eat finger foods!  While other snacks come and go, these cheery, wholesome crackers seem to stand the test of time.  I am super excited today to share some awesome printable worksheets that you and your kiddos can use while snacking on your own stash of Goldfish crackers!

I created a good variety of worksheets here that will be perfect for a spread of ages.  All of my girls had so much fun with these, from my 5-year-old up to my 9-year-old.  Some of the concepts kids can work on include:  sorting by color, quantity comparison, more/less/same, addition and subtraction with manipulatives, imaginative drawing, and completing a maze.

My organization-loving self was quite pleased to see these cute pyramids that were created with the more/less scale activity.

Everyone was excited about the variety sheet.  Wouldn’t this be so great to have in your purse with that baggie of Goldfish crackers when you’re on the go?  Kids getting restless in the doctor’s office or waiting for their food at a restaurant?  Bam!  They’ll love creating their own stories with this one.

Sorting by color is a great task for little ones and the colored Goldfish crackers are fun to sort while eating.  This is a good on-the-go activity sheet, too, especially for those kids who aren’t ready for drawing and coloring.

As a parent, I always like to see what my girls draw in a free space like this thought bubble.

There are both addition and subtraction activity sheets.  These would be really handy to laminate and use with a dry-erase marker.  Using manipulatives can be so helpful for kids as they begin learning math concepts.  These printable sheets are a great way to sneak in some brainwork with snack time!

Do you think your kids would love these activities, also?  I hope so – I had a really good time creating them.  You can download and print them out by clicking on the link below.  Have fun! 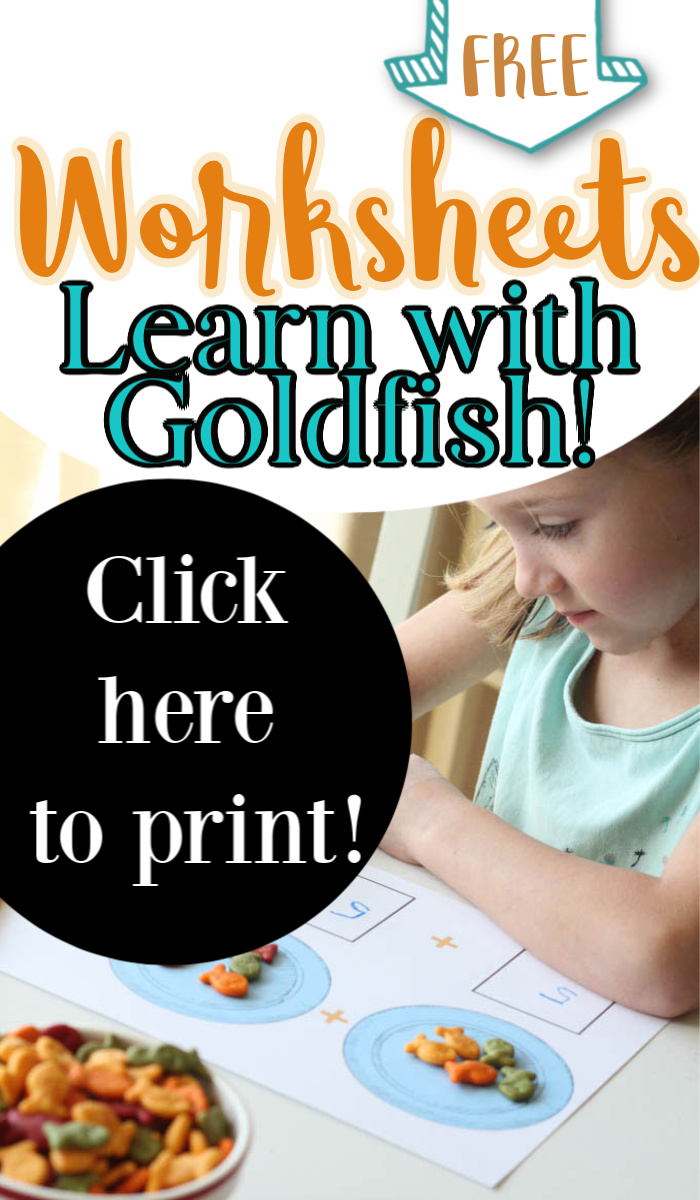 I have the best memories of playing games with my family growing up – we’d play Croquet or The Ungame or Clue – my parents were pretty good at setting aside time for family game night.  I don’t know if it’s because the girls are still pretty young or if we’re just too exhausted after work and dinner, but we don’t play games as a whole family nearly enough.  Family movie night is more our speed.  When I heard about a new season of Minute to Win It premiering on GSN on June 25, I got inspired to be create a Family Game Night with my family. I spent some time reviewing some of the Minute to Win It challenges to figure out how I could use things from around the house and structure the games so that they were exciting and achievable for my little girls.  I started compiling a list…and then I started brainstorming motivation factors.  Ice cream.  And candy.  Those would go over well as game prizes.  Thus, the “Minute to Win It Ice Cream Sundae Challenge” was born.  Funny how I can work dessert into anything.

So…this is how we set up family game night.  I chose six games based on the Minute to Win It games:  Stack Attack, Matchmaker, Hoop de Loop, How’s It Hangin’, Mad Dog, and Noodling Around.  I divided the six games into sets of two and assigned one prize category to each set of games.  If the player completed either of the two games in each set within one minute, he/she would win Cones/Cups, Ice Cream/Hot Fudge, or Toppings.  So, basically, the girls had to choose one game per prize category; Graham and I had to complete both games in each set to get all the ingredients for our Ice Cream Sundaes.

I got a tad bit into the planning of family game night – what with the signs and ice cream stand, and shopping for every topping I could dream of to put on   our sundaes.  Fortunately, I didn’t have to shop for game supplies and just used things from around the house and yard.  How did it go?  It was awesome.  The girls got really pumped up when we started hammering the signs into the ground and setting up the games.  I got my tripod and camera set up, got my camera remote working, and set up my iphone with a one-minute timer.  We were set to play!

First game:  Hoop de Loop – roll a hula hoop across the lawn (I spray painted a start line on the grass)  to hoop around a two-liter bottle.  This game was fun for some (Olivia and my husband) and somewhat frustrating for others (Grace and me).  We moved the line closer for Grace and she was able to hoop de loop within the minute just fine.  Addison opted for the other game to win her cups/cones!

Second game:  How’s It Hangin’ – swing a banana, suspended by a rope from the player’s waist, to knock an inflatable ball across the grass and into a target area (spray-painted circle on the grass).  Addie used her hands to swing the rope and had an absolute ball (har!har!) with this game.  She was so cute to watch.  Graham and I also swung our bananas successfully, but I have to say, it was harder than I thought – I have no idea how they do it to knock oranges into a hula hoop in the real game.

Third game:  Noodling Around – Using only a piece of spaghetti in your mouth, pick up four penne pasta noodles from a tabletop.  This one was super fun!  Of course, it was the windiest day of the year, so it was difficult even keeping the penne pasta on the table as the wind kept rolling the noodles off.  BUT, a few of us tried it at the end of our game night and I highly recommend you incorporate this challenge into your next family photo session.  Love the glamour shots we got here! 😉

Fourth game:  Stack Attack – Stack 21 plastic cups into a pyramid (adults had to do it twice within the minute).  The girls had a super fun time with Stack Attack and it was really at the perfect level for all three of them.  Even Addie got her pyramid stacked just in time.  I tried tickling Graham to distract him, but neither that nor the windstorm could keep him away from winning his ice cream – that boy loves his ice cream!

Fifth game:  Matchmaker – Sort 16 individual candies, placed under mason jars, into one of four groups, based on color.  Needless to say, this was a favorite of the girls.  They got so into it and it turned out to be at just the right level for them.  The older girls were so sweet during Addie’s turn – holding out the jars for her to throw each candy in and cheering her on.  Those cuties melt my heart.

Sixth game:  Mad Dog – Using only your mouth, pick up a ruler containing two small cups of noodles (hot glued onto the ruler) and shake your head to empty the noodles from the cups, then place the ruler back on to the stand.  My other favorite set of pictures.  Seriously awesome game to watch.  You’re supposed to use Tic Tacs in their containers, but I don’t think you’d get the same flying of the macaroni effect for your picture gallery.

So, there you have it.  Our “Minute to Win It Ice Cream Sundae Challenge” for family game night.  It was so fun.  And we all won the grand prize – we’re just that good!!   I have a newfound respect for all of the contestants on the Minute to Win It show.  Our games, which were all played at about Level 0.5, gave me a decent challenge.  How do those people ever have a chance at Level 10??  I think my whole family is going to look forward to watching the new season of Minute to Win It when it premieres – we’re totally invested now that we’ve been on a show of our own – haha!  Now I’m going to challenge you:  plan a family game night of your very own – I promise you won’t regret the memories you’re sure to make – and set up a camera for some priceless pictures while you’re at it (you know you want a cross-eyed, pasta scooping self-portrait!!)  I’ll even share my Ice Cream Sundae Challenge signs with you – just click on the links and print!