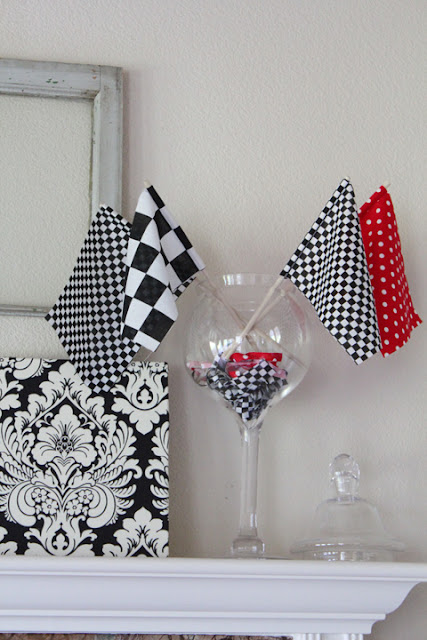 I have to confess that I had to bite my tongue a bit when Grace decided she wanted a Cars party this year.  I stopped myself from suggesting butterflies or birdies or even, Strawberry Shortcake.  I also have to confess that I’m not the biggest fan of characters taking center stage for party themes, bedding, or t-shirts.  But I try   not to say no to the kids just because I have different taste.  So, Cars it was.  I thought I’d share some of the decorations that I put together.  I think that the little bit of time that it takes to put together a few custom decorations really makes a big impact and changes the entire feel of the party.  The decorations just transform the space, or at least, for me they do.  Since the party was right after Christmas, I didn’t have the opportunity for really time-consuming projects, so I focused on three areas:  fabric, flowers, artwork.  I’m writing up some how-to for anyone who is looking for Cars party inspiration at your own house!  Feel free to skip over the wordiness.

The fabric that I purchased for the party consisted of two patterns of black and white checkered flag – one large and one small – as well as a few yards of black broadcloth.  All three of these fabrics were very inexpensive – around $3 per yard.  I used the checkered flag fabric to make Grace’s party outfit, pennant strings, and a tablecloth.

For the tablecloth, I simply stitched two widths of fabric together and serged a rolled hem around the four sides to make a covering for a 60″ round table.  This project took approximately 30 minutes total.

To cover the kitchen island, where the food was served, I purchased approximately 3 yards of the black broadcloth and serged a rolled edge around it without any cutting or sewing.  I used a piece of chalk to draw a dashed line down the center of the fabric to make a “road.”

I’ve made a number of paper and fabric pennant strings in the past and the method I used this time was, by far, the easiest.  Using the checkered flag fabric and a number of coordinating remnants from my stash, I cut the triangles and serged them together in one line by feeding in one triangle butted up to the next.  In order to achieve a finished look from either side of the pennant string, this is what I did.  I took a large piece of each fabric and sprayed the wrong side with fabric spray adhesive.  Then, I folded the piece of fabric in half (wrong sides together) and ironed it to activate the adhesive and bond the fabric to itself.  Then, I cut the double-thickness of fabric into the triangles.  The result was finished triangles which had the fabric pattern on both sides and edges that did not fray.  There was no need to stitch around each triangle, stitch two triangles together, or otherwise finish the edges of the triangles.  The pennant string project (which yielded approximately 30 feet) took just a few hours from start to finish. 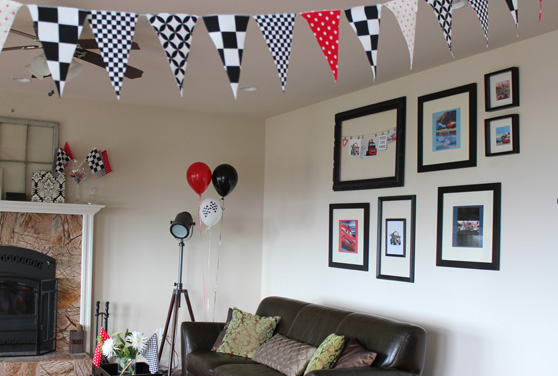 I zipped up some flags from the leftover fabric, too, because what’s a car race without flags?  I used this cool technique that I discovered in my serger manual to make the tube to slip over some cut dowels.  Super quick, super cool.  If you want more details, let me know.

Since the theme for Grace’s party would typically be considered pretty “boy”ish, I wanted to work in some feminine touches.  One way I did this was by choosing more girly fabric to coordinate with the checkered flag in the pennant strings and flags.  Another quick way to soften the decor was with a few flower arrangements.  I actually just used one large bunch of flowers from Costco and divided it into several vases around the house.  I added a couple flags to the arrangements and had nearly instant, pretty decor.

I also spent just a little time searching for Cars clipart on Google Images.  I resized or cropped the images in photoshop to fit into my wall frames.  I tried to get the images printed up quick at Kinko’s, and I was not all that surprised to learn that they were not able to print any Disney images, even though these images were free clipart.  Not a big deal, we just printed them up right on our home printer and it was totally fine.  I know you’re probably thinking I’m a total dork for framing up Cars clipart, BUT the truth is, that I still had my Christmas art in the frames and it had to be changed out anyway.  With my husband’s help, it literally took us ten minutes to reframe and rehang the Cars art.  And it was a big hit at the party.  Grace squealed and shouted out “There’s Mac! and oh!OH! there’s Lightning, and, look, that’s Sally!!” 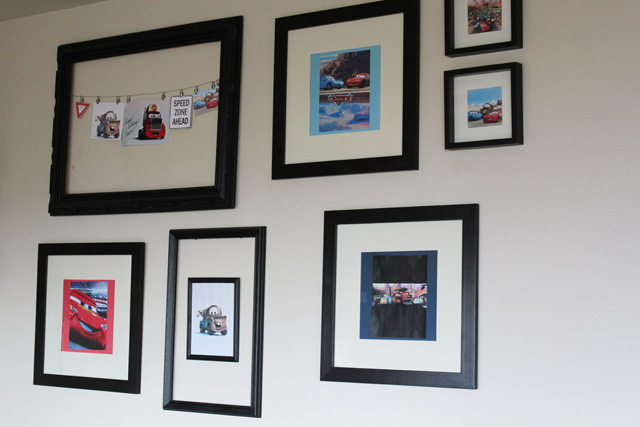 The final piece of decor was a “Flo’s V8 Cafe” sign that I hand-painted.  I had the hardest time getting a good picture of this thing, but I thought it turned out really fun and it also took the place of our normal light fixture that’s missing from above our kitchen island (slow progress on the kitchen flood repairs).  I AM NOT a drawing/sketching/painting kind of artist, but I do love how this little sign turned out.  I used a lightweight pre-cut piece of balsa wood that I found in the wood section of Joanns.  I applied two coats of gray acrylic paint and allowed it to dry.  Then I created a Word document with a script font and the V8 symbol.  I printed it out and transferred it onto the piece of wood.  To transfer an image, first scribble pencil all over the wrong side of the paper.  Then, place the pencil-scribbled side of the paper down onto your project and trace the outline of the image.  When you trace, the pencil on the backside is transferred onto your project.  I think I read about this on someone’s blog, but I have no idea where.  It worked miraculously well.  Then I just used a little paintbrush and painted in the outline with acrylic paint.  I sprayed a coat of clear sealer over the top (not sure if this had any impact or not) and then I hot glued metallic red pipe cleaners around the edge for a neon sign look.  Graham drilled a couple holes in the sign and we used fishing line to hang it up. 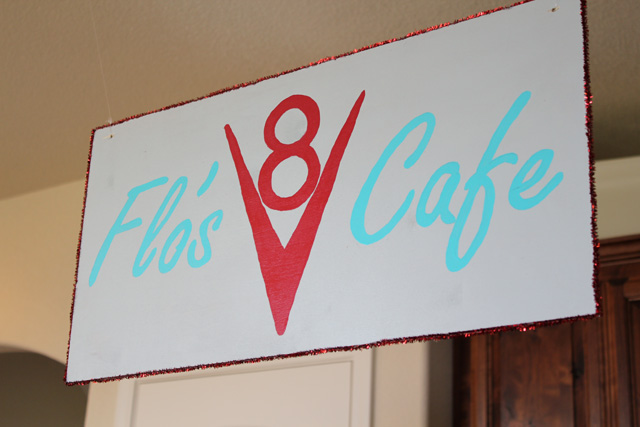 (Under the sign, we served up a nacho bar, hot dogs, grapes, and some corn salsa for those less focused on unhealthy eating habits.)

Okay, so that’s a lot of rambling.  I hope you enjoyed the tour of our girly Cars party.  It was probably my favorite party yet . . . and now I have a 6 month break until our next kid party.  The wheels are already spinning though.  I just can’t get enough!! 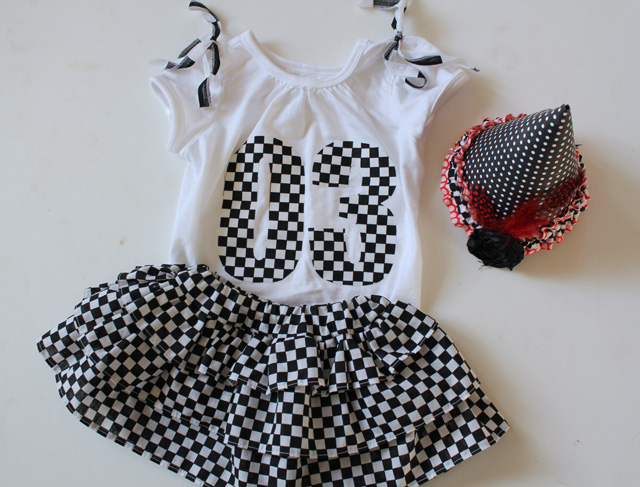 Flirty, twirly, sassy, and girly, definitely a racecar girl’s dream for a birthday outfit.  A three-tiered ruffle skirt from checkered flag cotton and a quick 03 applique on a white t-shirt (plus quick checkered bows on the sleeve caps). 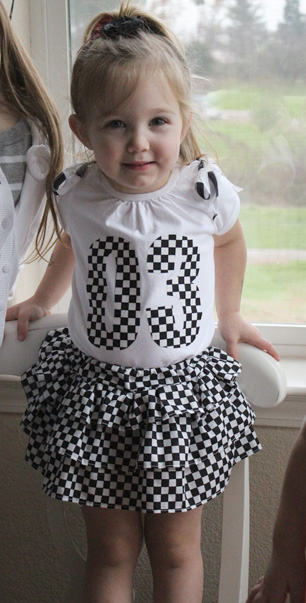 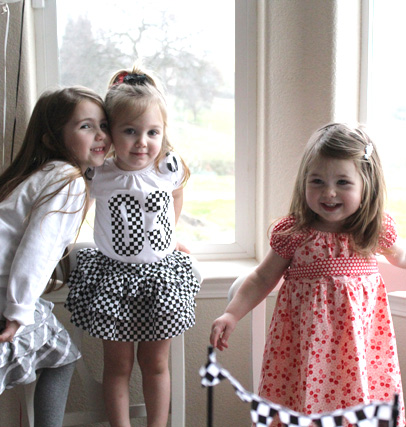 Of course, I had to do another ruffle party hat.  And this time, Grace’s hairclip doubled as the bow on the hat.  Perfect!!  I just love the sass along with the sweet.  So very Grace! 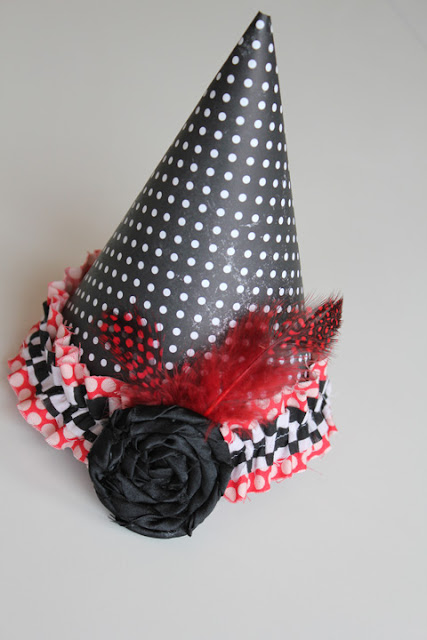 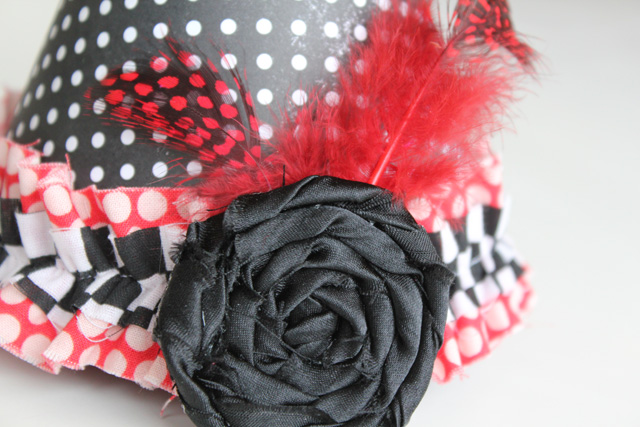 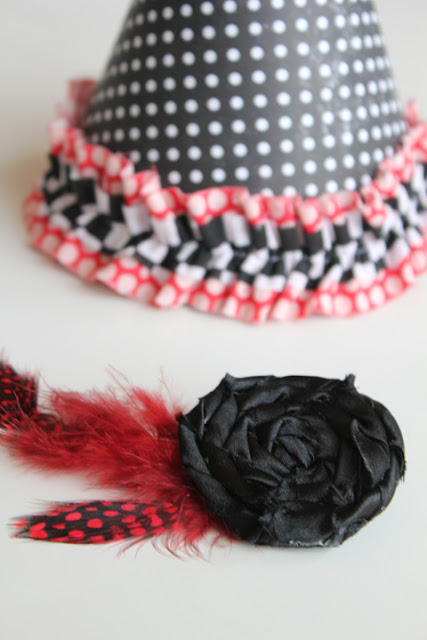 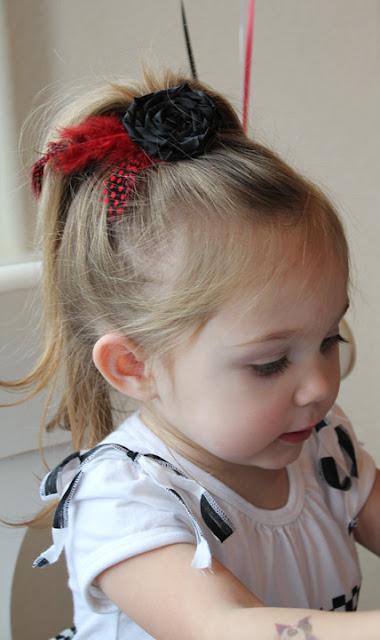 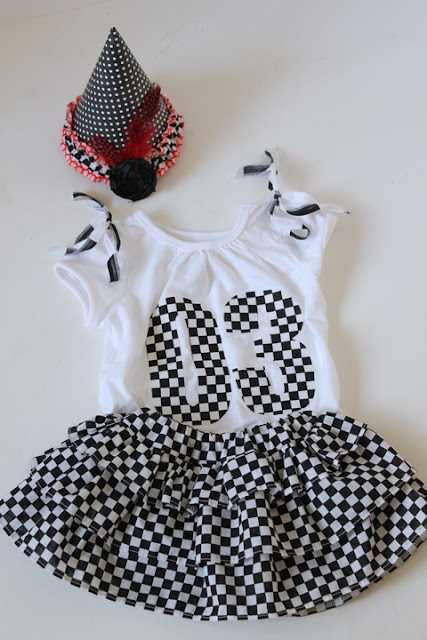 Tired of party posts yet?  I thought I’d try for one more with the decor…