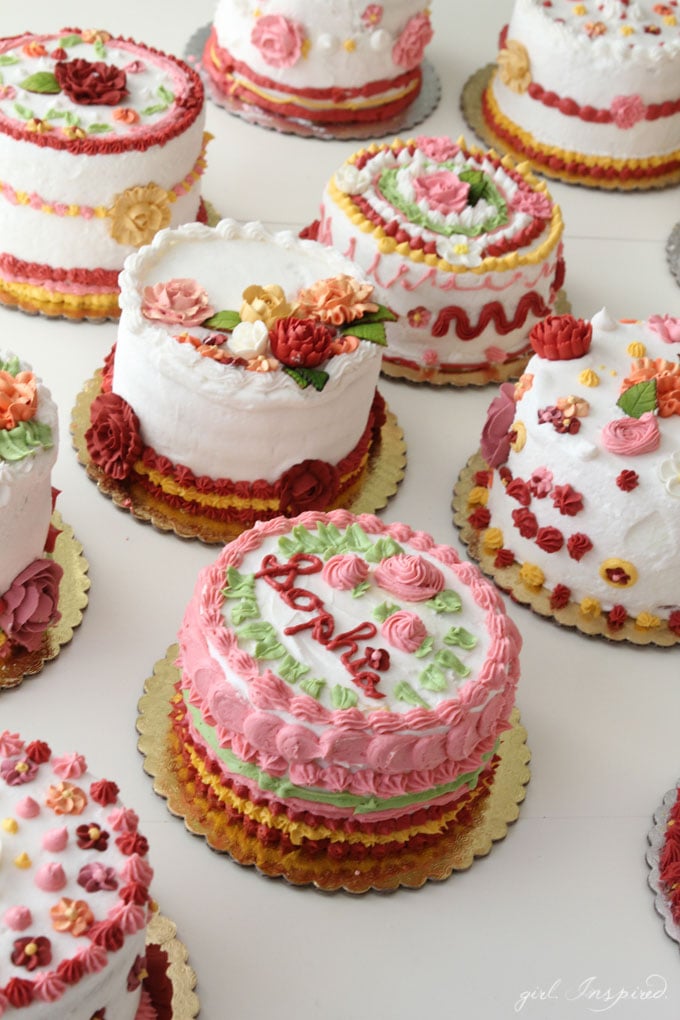 I’m not going to lie.  I called my mom in for this one.  Moving, starting a new school, remodeling…not so conducive to throwing a pulled together party for your ten-year-old.  But she loves baking and art and cake.  And she wanted a cake decorating party to invite allllll her new friends.  Fifteen girls to be exact.  So I committed to it and I called my mom.  She came down two days before the party and helped me stack, fill, and frost 17 three-layer cakes. She’s amazing and I love her. 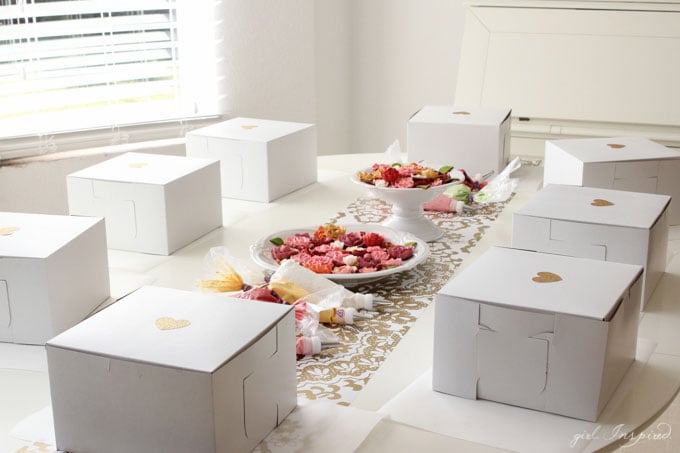 This party turned out SUPER awesome.  Ten-year-olds are old enough to decorate their own cake and still young enough to go easy on themselves and just have fun.  I wasn’t really sure what to expect, but I wanted them to be able to both express themselves creatively and take home a finished product that they were proud of.  It appeared that this was a new experience for each one of them and they ALL spent a LONG time making their creation. 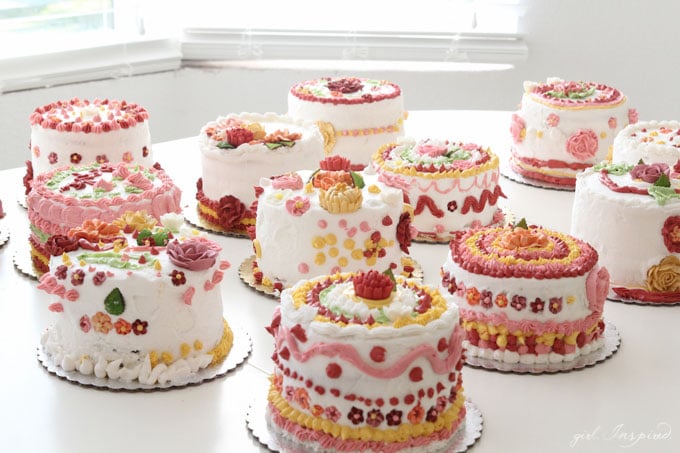 Sound like something your tween would love?  You can do it – here are the details of what what we did.  I prepped for the party by baking a million and one 6-inch cake layers in a variety of flavors.  I baked the cakes over the course of about a week and a half.  After each layer was cooled, I wrapped it in plastic wrap and stored it in the freezer.  I went into quite a bit of detail about baking ahead of time, you can read here, if you’re interested.  I visited my local cake supply store and purchased raspberry filling and three large tubs of pre-made “mock whip” frosting – which is basically a shortening-based standard frosting.  It can be refrigerated, frozen, and holds up fine for basic piping.  I’m going to estimate that it took me about 15 pounds of frosting (the tubs are 6.5 lbs each) to frost and fill 17 cakes + color and fill all the piping bags for party decorating. 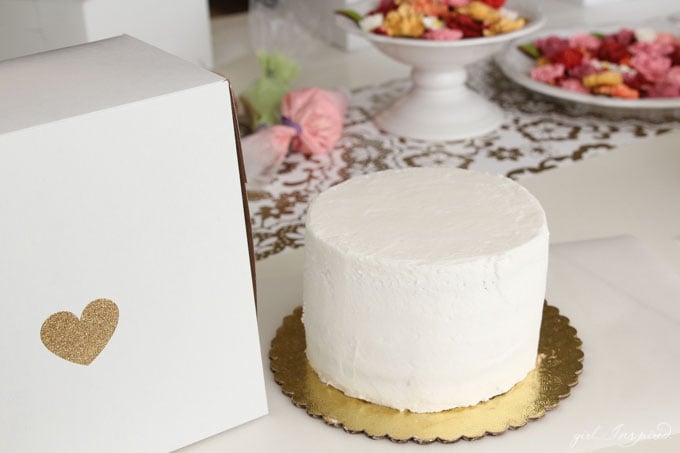 I also purchased the white cake boxes and the gold or silver “scalloped cake rounds” for the base of the cakes.  You might be able to get these in bulk from an online supplier – here are the gold scalloped rounds through my affiliate, for example, but you can purchase them individually from your cake supply store and they can help you choose the correct size if you’re not sure exactly what you need.  We used 8-inch rounds to go inside 8-inch cake boxes to safely hold 6-inch round cakes.  You want the cake smaller than the round and the round the same size as the box, so it doesn’t slop around in there. 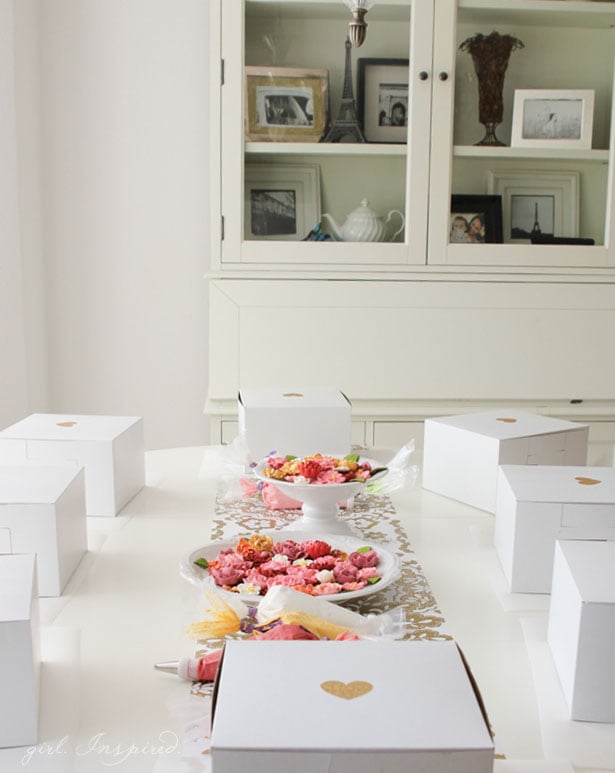 As I mentioned, my mom and I stacked, filled, and frosted the cakes in the two days before the party.  I don’t have a ton of freezer space so we had to store the cakes, inside their boxes, on a shelving unit in the cold garage.  For the purposes of frosting the cakes, however, we did crumb coat them and pop them in and out of the freezer so that the crumb coating could harden and we could then frost.  Now, the garage storage plan would have worked out perfectly if the weather had stayed in the 30-40 degree F range.  But the day before the party started warming up unexpectedly and the by party time, the cakes had softened more than would be ideal  A couple of them cracked a bit and the frosting was too soft to touch up without a big disaster.  We had extra cakes, so it worked out fine and I was able to pop the individual problem cakes into the freezer and fix them up, but I would definitely recommend utilizing freezer or refrigerator space to store your cakes if you can (especially if you have the number of guests at a more reasonable number – like, say, 6).  I would also recommend doing this the day before the party or the morning of the party if your party is late in the day.  I hosted a different adult dinner party the day before this cake party, which is why I needed to prep all the cakes two days before. 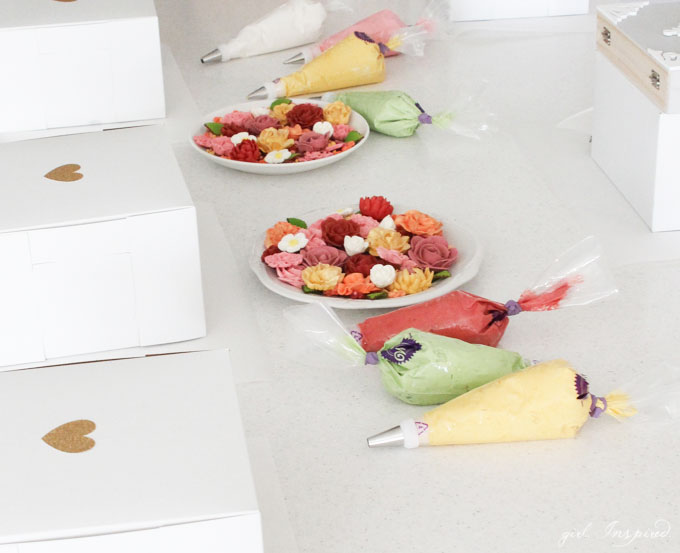 The morning of the party, I colored the frosting in deep red, mauve, yellow, and green.  I filled 12 in. disposable decorating bags with the colors + white.  There were three of each color available, divided between two workspaces.  I put leaf tips on all the green and then varied the remaining colors between just a few basic tips – an open star, an open round, a small round. 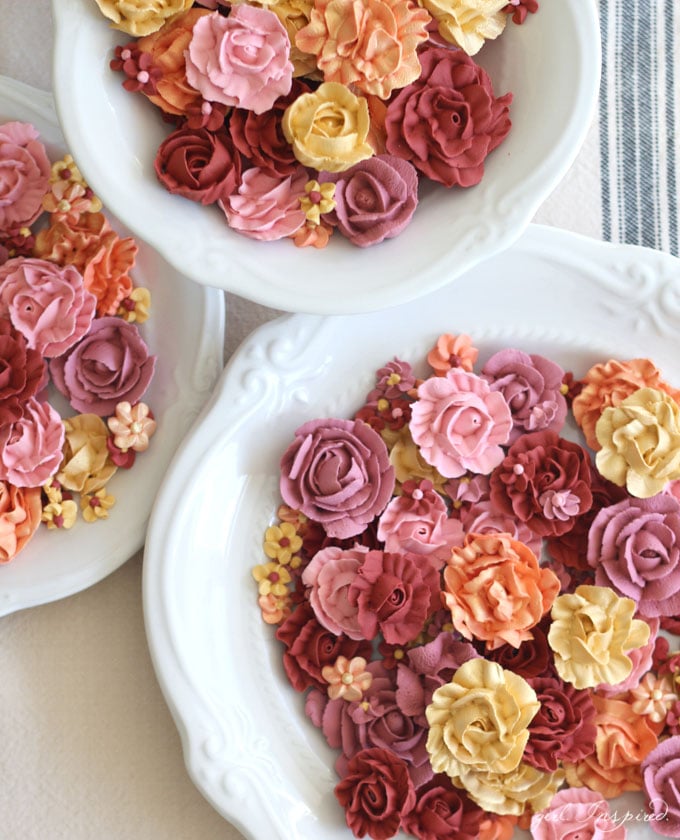 I pre-made flowers using royal icing about a week before the party.  I wanted the girls to be able to just pop on some flowers if they wanted to supplement their own creations or if they weren’t super into it.  I also purchased a few pre-made leaves from the cake supply store.  You can purchase royal icing or gum paste flowers in all sorts of gorgeous detail, but they can get expensive, especially if you need enough for a large group.  I really loved the pop of color and festivity that the pre-made flowers added to the tables.  If you look closely, you may notice that the yellow and orange flowers have a gold shimmer.  A quick blast of this amazing “gold mist” edible spray paint (aff.) turned these pretty flowers into spectacular flowers.  They were a party favorite….cause everyone loves shimmer! 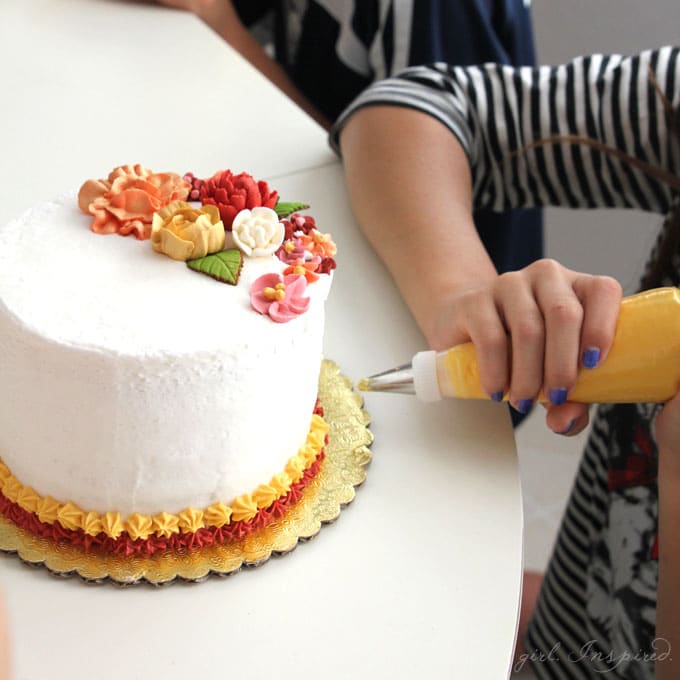 When all the party guests had arrived, I gathered them around for a quick demonstration.  I showed them the basics of how to put together a pastry bag with piping tip and coupler and fill with frosting.  Then, I showed them how to hold the bag and squeeze from the top while using their other hand to support the bag closer to the tip.  Using an extra cake, I demonstrated how to use some of the different tips that they had available.  They were really into the demonstration.  Fifteen kids watching intently and asking questions about how to make different patterns – I was impressed.  I also showed them a couple examples of finished cakes (that I had done for this cake decorating post) and that seemed to be really exciting.  My demonstration was about 15 minutes.  That’s it.  Then I set them loose. 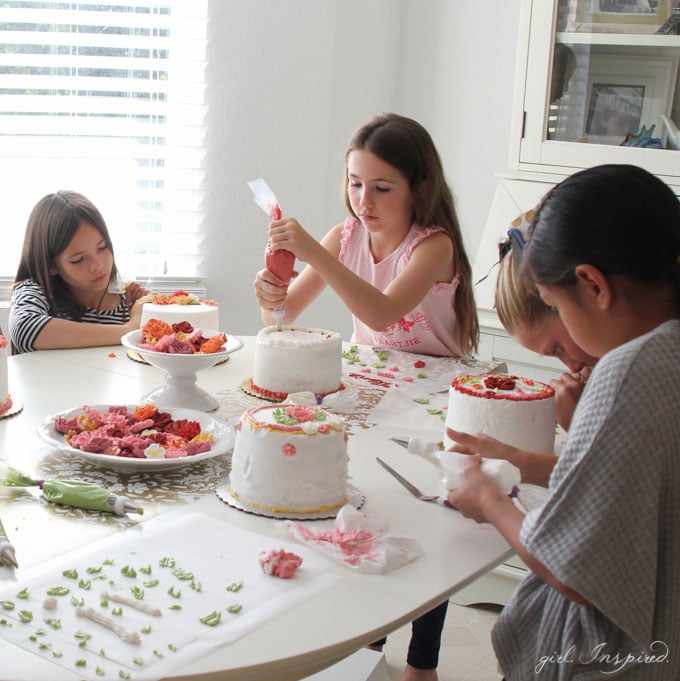 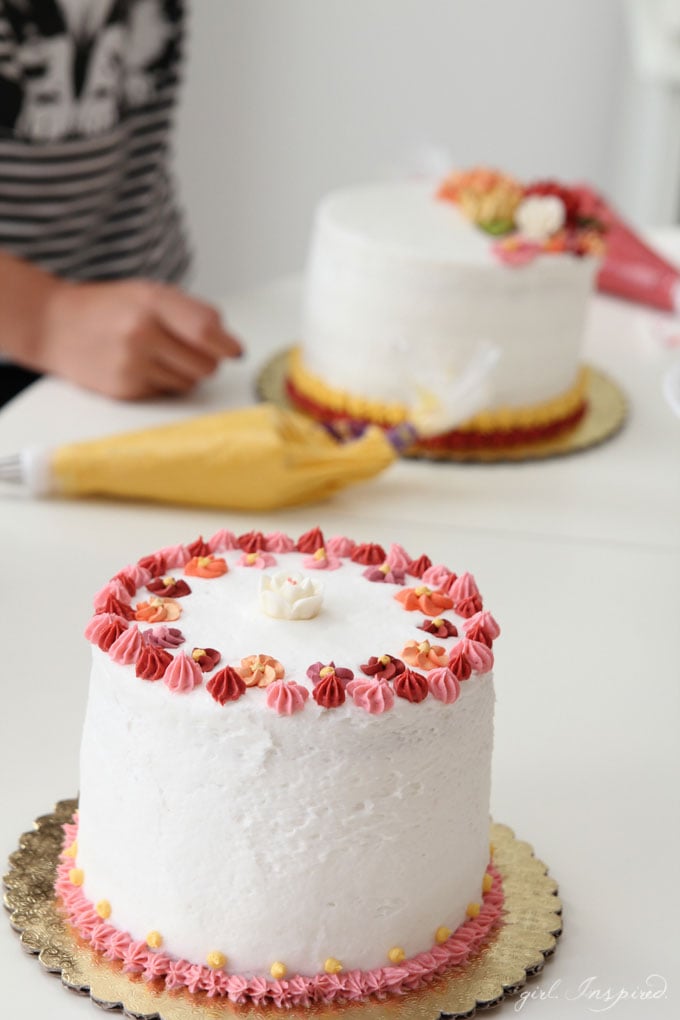 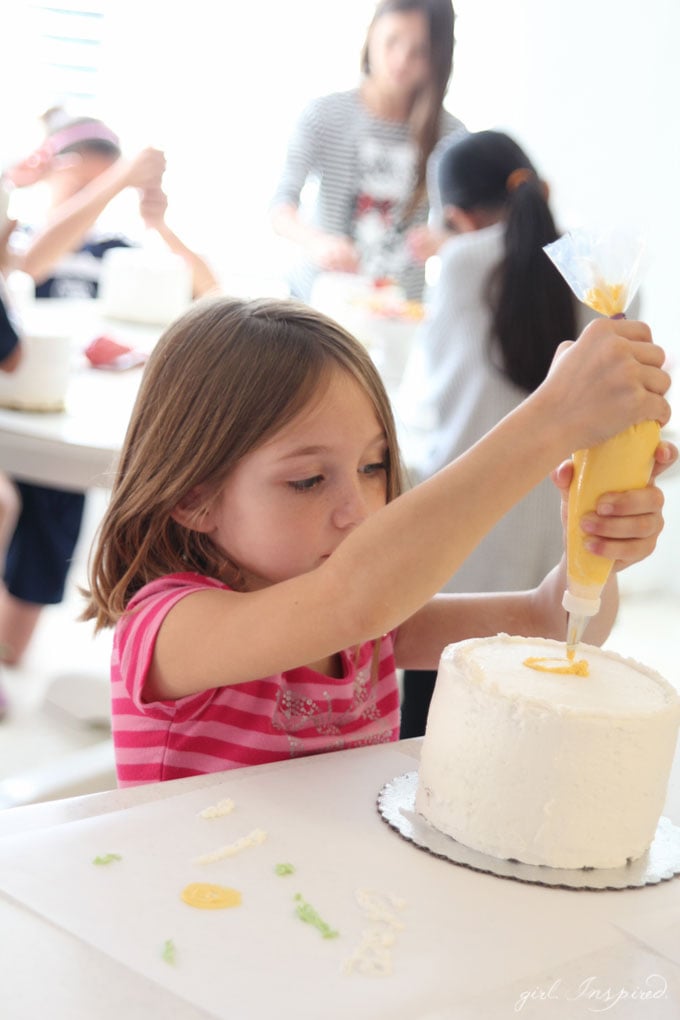 They were INTO IT!!  Each girl had a large sheet of parchment paper at their station to practice on and this worked out really well.  I think everyone did some amount of practicing.  And then they just went to town.  All of the cakes were different and they were all awesome.  I was shocked, actually, at how detailed they were and how much time they all spent working on their cakes.  Their creative efforts were so inspiring to watch! 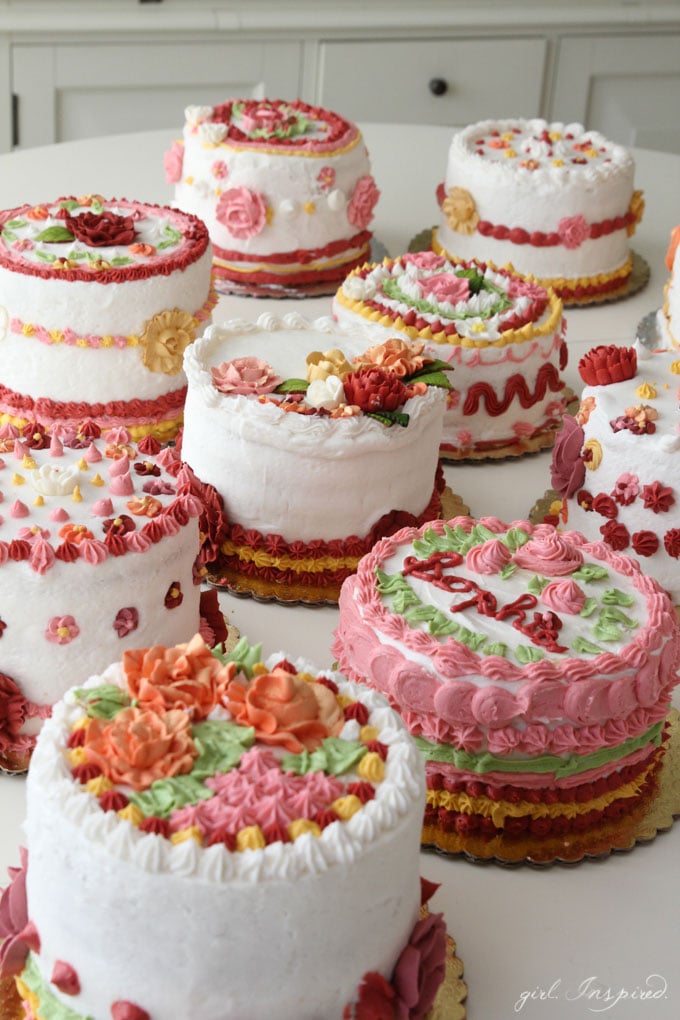 Aren’t these amazing?  Ten-year-olds!!  (And a couple 7- and 6-year olds!)  The girls spent a good 45 min. + working on their cakes.  We boxed them each up to take home with them.  They also took home a little favor bag with a pastry bag, coupler set, and piping tip so they could do some more cake decorating at home! 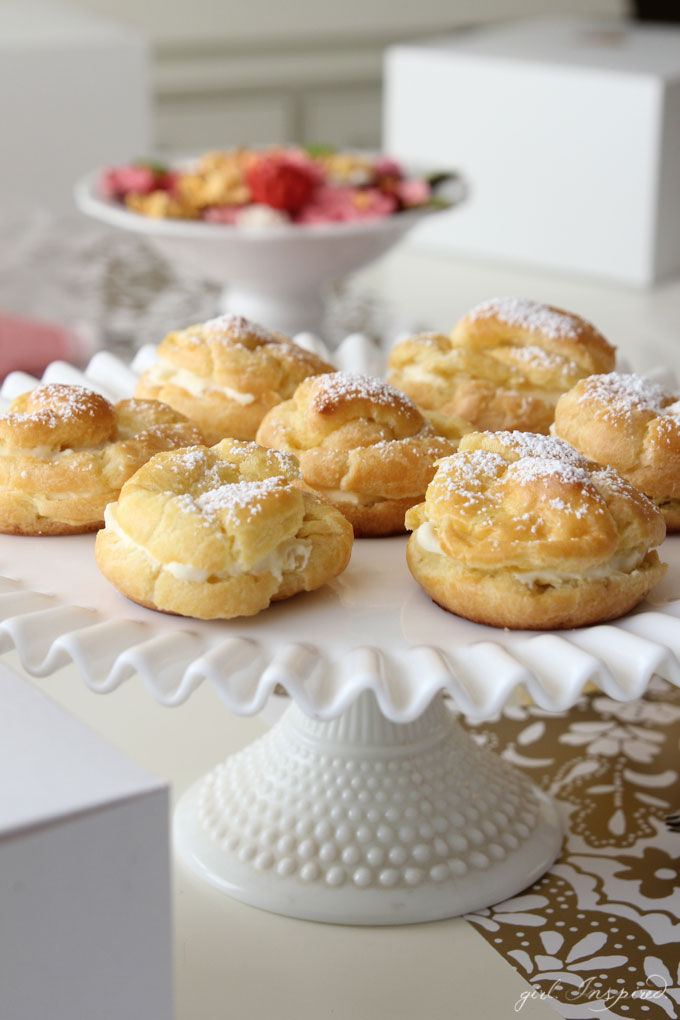 The birthday girl wanted cream puffs for the singing and blowing out candles part of the party, so we squeezed that in, too.  Always room for cream puffs, right? 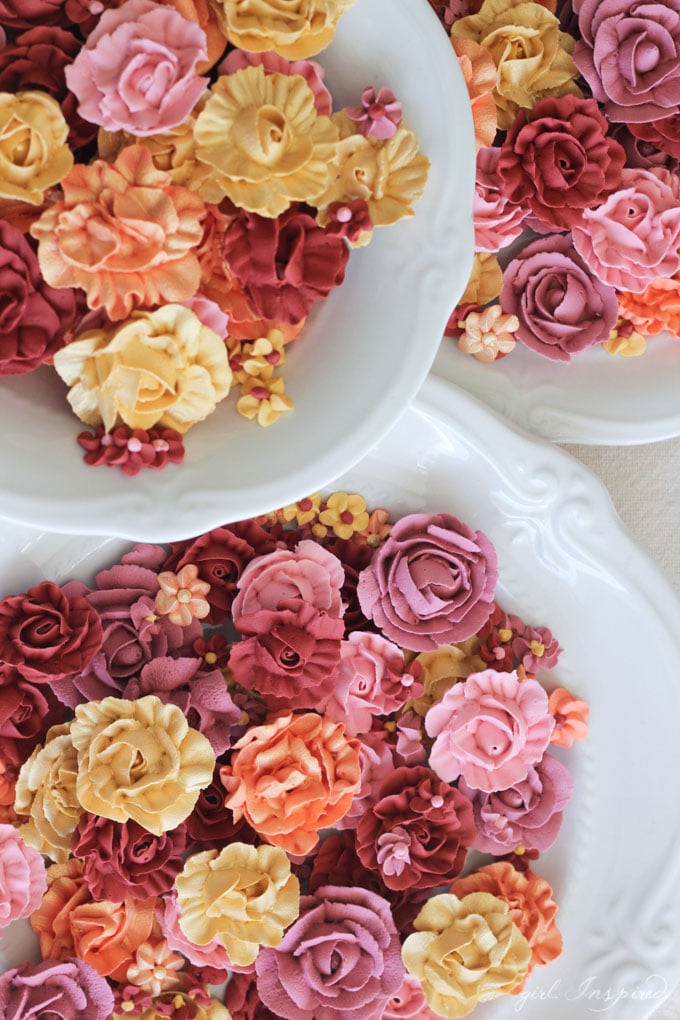 I hope you find inspiration for your next party here.  I think this would be so much fun to do with a group of adults, too or an older group of girls.  So satisfying to have someone prepare a cake for you to just play on!!!