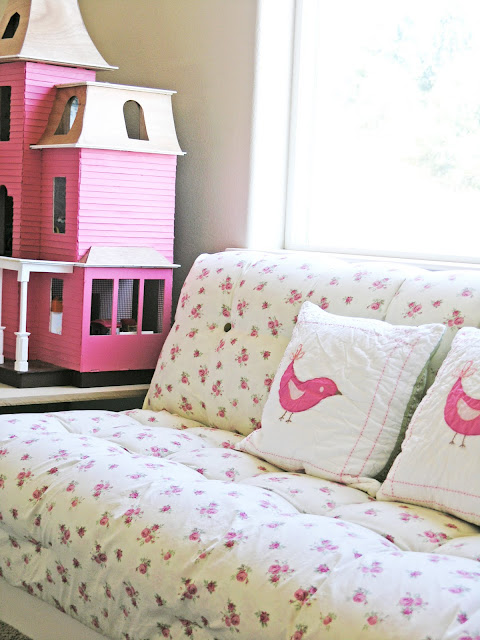 So, the couch.  Just for fun, here’s the before picture again. 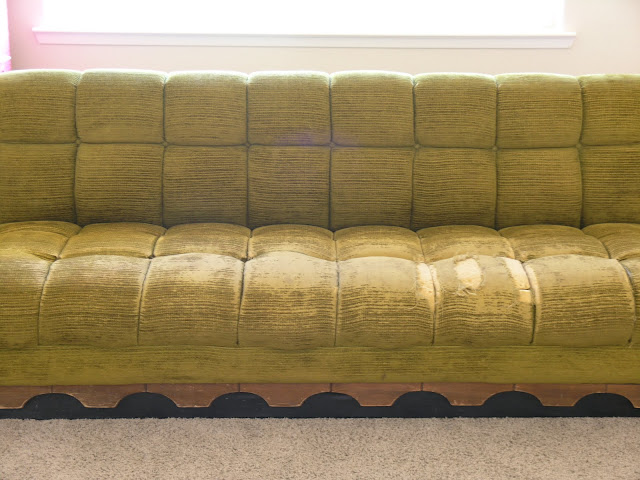 I could go on and on about how comfortable this couch is or the memories from my childhood playing on this couch; I could talk through the debate of washability (i.e., slipcovering) vs. being able to see the fabulous tufting.  I don’t want to bore you though and I have some fabric calling my name in the other room.  So, here’s what I did, in one night, with an unused twin duvet cover I found in storage and a package of $5 upholstery needles.
I’m not an expert or a professional, but I’m sharing anyway, just in case you have a well-worn, beautifully tufted couch that you can’t part with either, and you’re looking for an inexpensive, temporary solution.
What I’ve discovered about reupholstering things is that they look really intimidating until you bend down and start studying how the piece of furniture was covered to begin with.  And it’s basically just big pieces of fabric pulled all the way around the couch and stapled into the wood frame.  I started with the tufting.  I snipped off the old buttons and reused them – love the way the old, worn green buttons coordinate with the new fabric.   I looped a long stretch of kitchen twine through the button 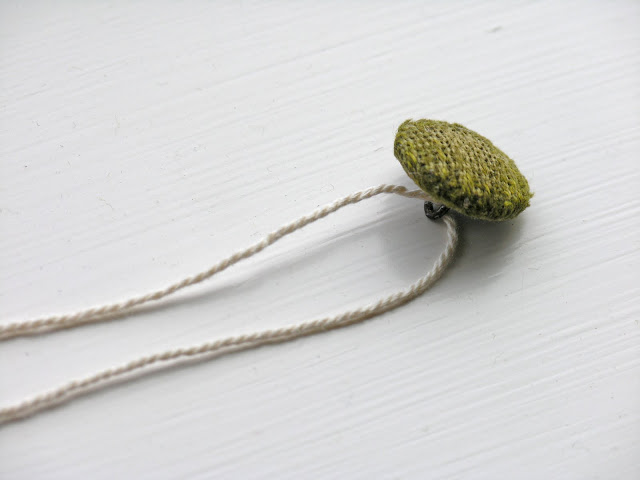 and threaded both ends through a large upholstery needle (12 inches) and tied a knot to secure the twine to the needle. 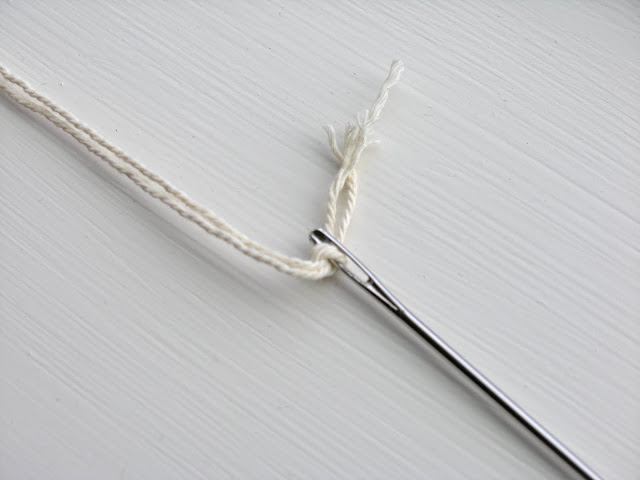 Then, I stretched the fabric evenly over the area where the button would go.  I wanted to make sure  there was enough fabric to dip down into the little valleys.  Since I just put the fabric right over the top of the old upholstery, the grooves and button holes were very evident – this made it so simple.  I pushed the needle straight down into place through the new fabric and into the couch. 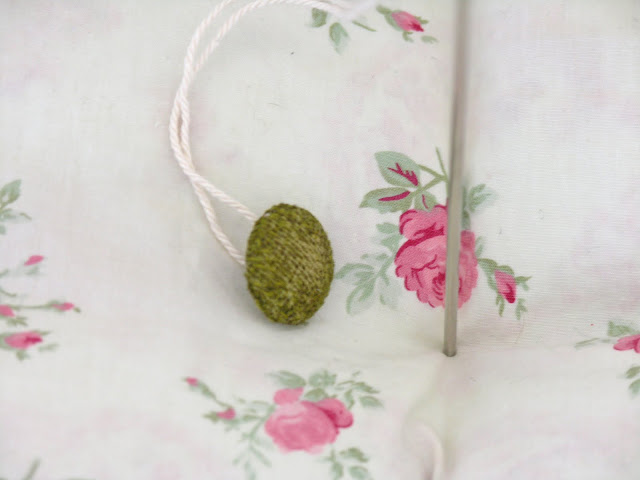 I flipped the couch onto its front and pulled the needle the rest of the way through from underneath. 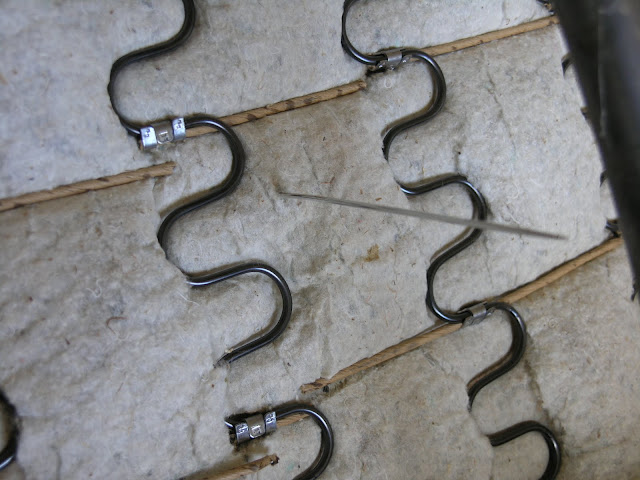 I untied the knot securing the needle to the twine ends.  I left one end of twine threaded and stuck the needle through a wad of cushioning. 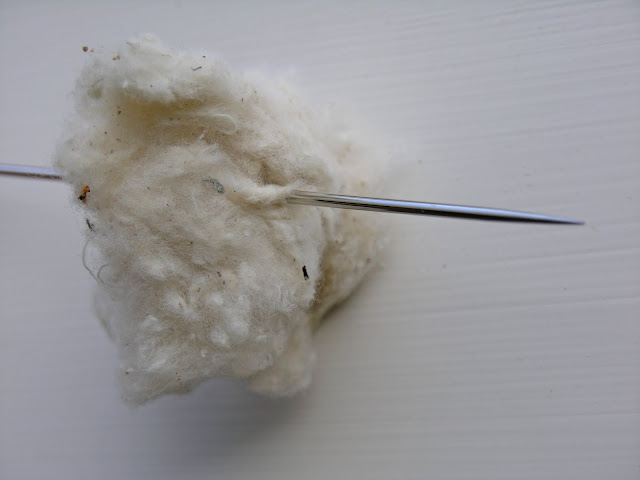 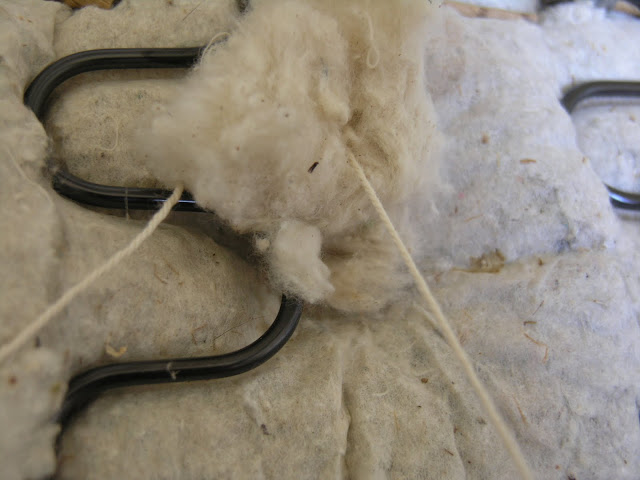 I then knotted the two ends of twine together with the wad of cushioning in between. 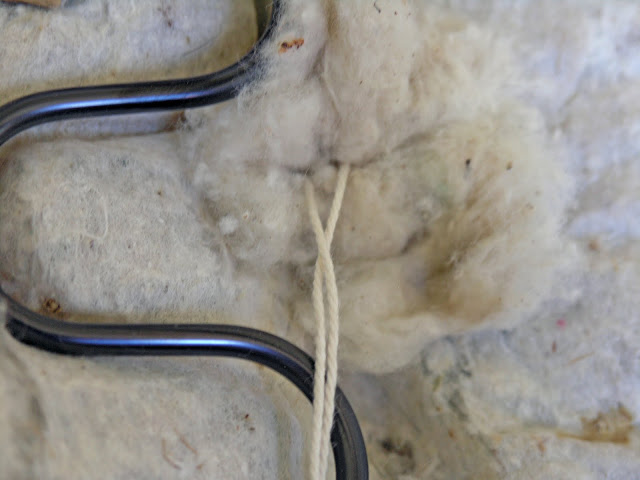 If you just pull your twine ends through the couch and tie a knot, the knot will pull back up through the couch and the button won’t hold, much less form a nice little tuft.  Knotting the twine over the extra ball of cushioning makes a secure hold and prevents the knot from pulling back through.  This is also the reason for using kitchen twine (or some uphostering-specific twine you could purchase, I’m sure).  If you just use thread, even heavy-duty upholstery thread doubled up, it won’t hold.  So, here’s the finished button. 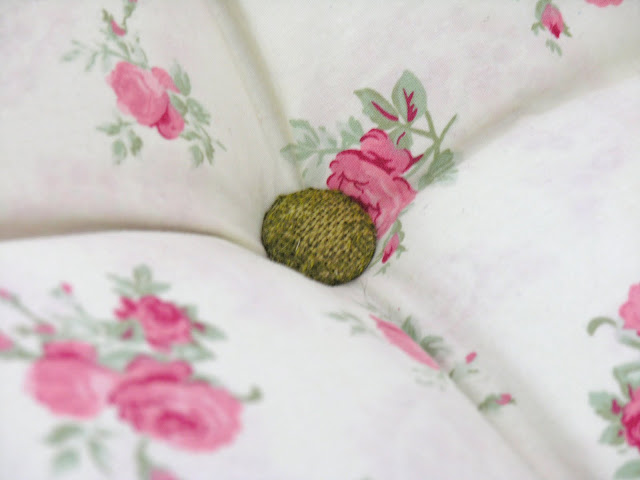 I worked from the center of the couch out to the sides and secured all the buttons, pulling each one as tight as I could and checking after each one to make sure that it ended up in the right location and with the right tightness.  I removed the fabric from the back of the couch to expose the innards of the back seat and did the same with those buttons.  The duvet cover didn’t spread all the way down the back of the couch, so I just stapled the old fabric back in place (it doesn’t show since the couch is pushed against a wall).  Then I used the hand upholstery stapler to secure the duvet cover all the way around the front of the seat.  I’m done for now and I couldn’t be happier with my quick, cheap, emergency couch makeover! 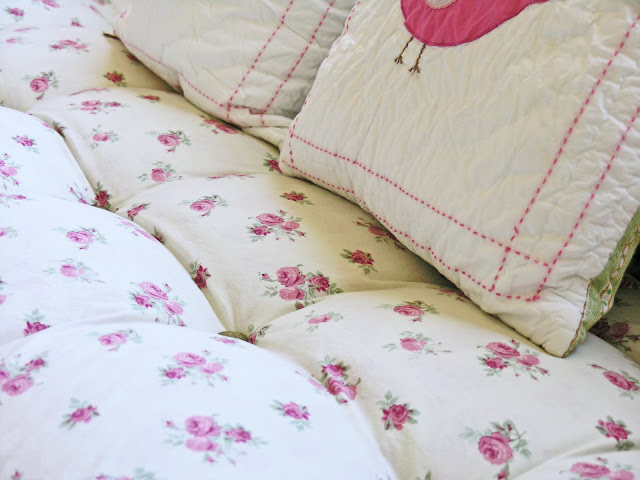 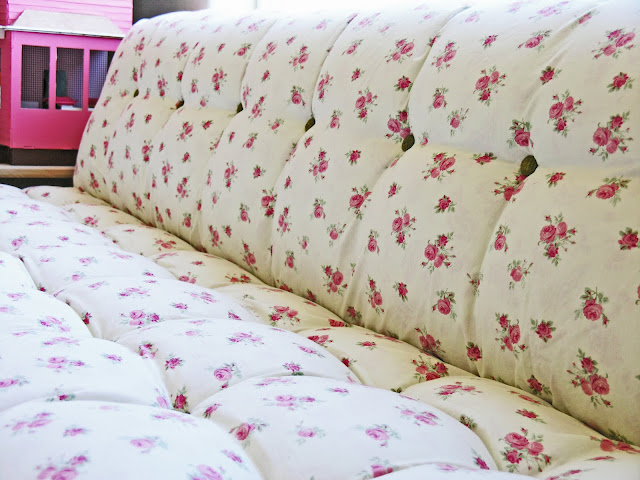 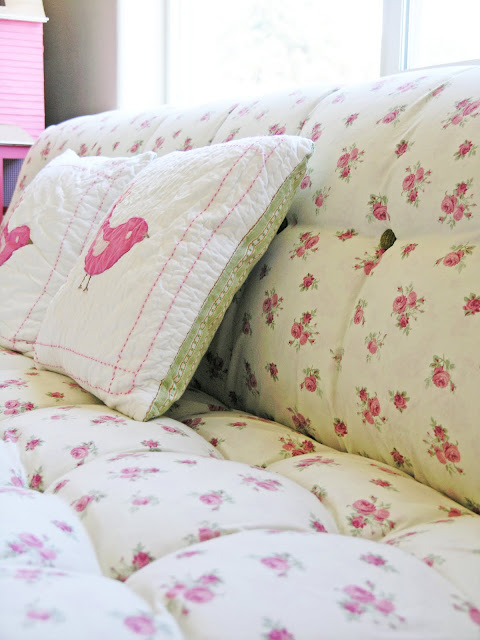